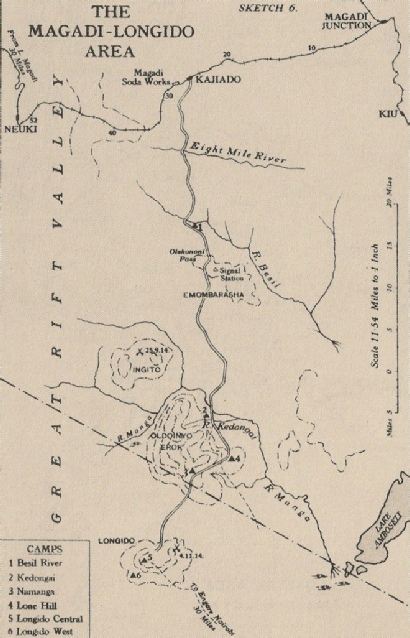 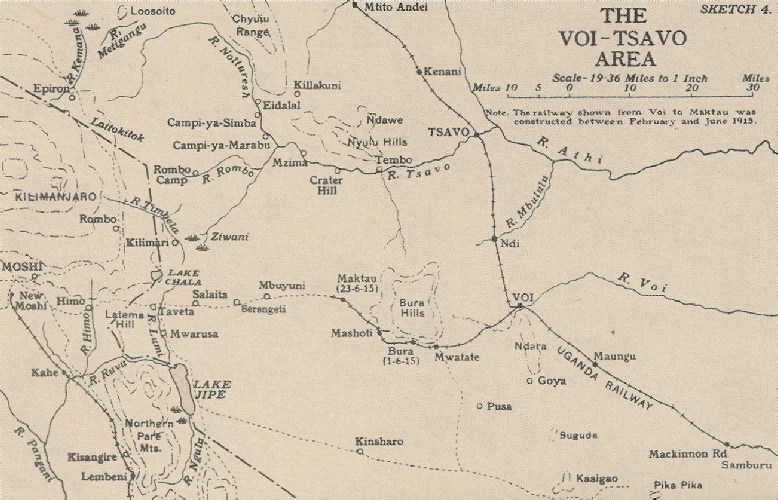 The British reverses at Tanga (December 1914) and Jasin (January 1915) had meant that any further offensive actions were strictly forbidden by Lord Kitchener at the War Office, other theatres of operations were to take priority over East Africa and few reinforcements would be made available to guarantee any form of success.  From the end of January 1915, and for the foreseeable future, the forces in British East Africa were to adopt a “definitely defensive attitude along the Anglo-German frontier from the Lake to the sea”, the forces available being concentrated at suitable points to enable them to act as required.  Some reinforcements did arrive in theatre during this period, the 2nd Battalion Rhodesia Regiment arrived on 14th March but this did little to improve the already difficult situation of defending the borders as the German commander von Lettow-Vorbeck continued to increase the number and range of his activities from attacking outposts and ambushing small columns to regularly blowing up sections of the Uganda railway.

In April 1915 Brigadier-General (subsequently Major-General) M. J. Tighe assumed command of the East African Force from Major-General Wapshare who had been ordered to Mesopotamia.  Asked for his views on the situation in theatre Tighe replied that if “1½ brigades of good troops were provided” then an offensive in the Kilmanjaro and Tanga areas should be possible and he also proposed a preliminary operation against Bukoba and Mwanza.  The response from Lord Kitchener was not what Tighe wanted to hear, reinforcements could not be promised and the War Office had “grave doubts as to the wisdom of undertaking any serious offensive”.  Tighe, like his predecessor, was not “to embark on operations involving occupation of German territory” but was to restrict his activities to the “protection of our own possessions”, any operations on Lake Victoria against Bukoba and Mwanza were put on a back burner.

With the German forces becoming increasingly disruptive along the border, and despite their previous statements in the negative, the War Office was able to send some small reinforcement to British East Africa in the shape of a battalion of British infantry.  It was into this defensive situation that the 25th Battalion Royal Fusiliers (Frontiersmen) found themselves on arrival at Kilindini on 4th May 1915 having left the UK on 10th April.

On arrival in British East Africa the battalion commenced disembarkation at 2 p.m. on the afternoon of 4th May, entrained over the next few hours and finally arrived at Kajiado, which was to be their base for the next three months, in the early hours of 6th May.  Kajiado camp was about 1/2 mile from the railway station.

The next month or so saw the battalion undertaking training that had been considered unnecessary whilst forming in the UK as the average standard of the troops had been assumed to have been high.  This assumption was quite obviously incorrect when it was realised that half the battalion had never before completed a British Army musketry course and were despatched forthwith to Nairobi, presumably because this was the location of the nearest ‘official’ rifle range, to do so.

The remaining half of the battalion continued with their “usual parades and camp duties” and were inspected on a number of occasions by either Brigadier-General J. M. Stewart, Major-General Tighe or Henry Conroy Belfield, Governor of British East Africa.  At the same time small numbers of troops were detailed off to various defensive positions on the Magadi branch railway linking the main Uganda Railway with Lake Magadi.  During this time also some members of the battalion were formed into mounted infantry, a possible forerunner to the later combined Royal Fusiliers/Loyal North Lancashire Regiment Mounted Infantry Company.

Although ordered to the defensive, Major-General Tighe still considered it essential to undertake some form of offensive action, if only to restore the morale of his troops.  Further representations to the War Office were made and sanction was finally obtained to launch a minor offensive operation against Bukoba {see Bukoba 22nd to 24th June 1915}.

On their successful return to their camp at Kajiado the battalion resumed its pre-Bukoba activities, the men sent to Nairobi for the musketry course returned, the last of them arriving back with the battalion at the end of July and detachments were again sent out to various points on the Magadi branch railway and the surrounding district to defend against German patrols.

Between the 12th and 14th August the battalion, with the exception of the mounted infantry section which remained at Mile 56 on the Magadi Railway and ‘A’ company, under Captain G. D. Hazzledine, which had moved to Bissel, was transferred by train from the Magadi area to Voi.

The beginning of September saw the battalion on the move once more, this time to Maktau where they took over about half of the post’s day & night piquet duties, manned three blockhouses and provided covering parties.  Patrols of between 50 and 150 men were regularly sent out from Maktau, principally to the south and over distances of between 5 and 8 miles, in attempts to cut off & intercept German raiding parties trying to sabotage the Voi-Maktau Railway.  Those men not employed on patrol duties were kept busy by strengthening the post’s defences, trenches and shelters were constructed and about 600 yards of perimeter was put into a state of defence against rifle fire and shrapnel.  The end of September saw Captain H. H. R. White and ‘B’ company rejoin the battalion at Maktau, the detachment had suffered greatly from coast fever whilst away and 1 officer and 45 men, 1/3 of the strength, were hospitalised at Mombasa and Voi.

October and the first week or so of November was spent at Maktau performing the “usual parades, picquets, patrols, and camp duties” alongside the 130th King George’s Own Baluchis with whom they were sharing the camp and then on 11th November the battalion was relieved by the 2nd Rhodesia Regiment as they were now ordered to proceed to Bura where, in turn, they were to relieve the 2nd Battalion Loyal North Lancashire Regiment, the men with the Mounted Infantry Company remained at Maktau.

At Bura the battalion manned four blockhouses at which sentries were maintained day & night.  They also manned the two blockhouses at the railway bridge, maintained the signal station on Bura Bluff and provided a detachment to protect the water supply at Bura reservoir.  From their base at Bura the battalion provided protection, by morning patrols or nightly piquets, of the railway from Mile 27 to the west and to a distance half way to Mwatate in the east.  Additionally the country north of Bura was patrolled as far as Maktau, eastwards as far as Ndi Station and to the south where the Bura River formed a junction with the Mwatate River.  Whilst at Bura there was some considerable rain and subsequently the health of the men suffered with cases of malaria fever increasing, especially amongst those men detailed to provide bridge picquets.

Bura was to remain ‘home’ to most of the 25th Battalion Royal Fusiliers for the rest of the year with the exception of a picked flying column of 350 rifles under Major H. H. R. White which was moved to Maungu in late December to protect the Uganda Railway against expected raids in force. 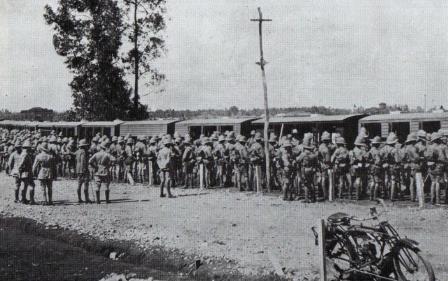 Captain H. H. R. White and the men of ‘B’ company were then moved by train from Voi for Msambwani on the coast where they were employed on patrol duty whilst the rest of the battalion were employed constructing the defences at Voi under the direction of Lieut.-Colonel D. P. Driscoll.  ‘A’ company, from Bissel, rejoined the rest of the battalion at Voi on 25th August and the mounted infantry section completed the battalion’s removal from the Magadi district by entraining on 28th August for Maktau where it combined with men of the 2nd Battalion Loyal North Lancashire Regiment to form a Mounted Infantry Company, 100 strong and initially under the command of Captain J. S. Woodruffe, Royal Sussex Regiment attached 2nd Battalion Loyal North Lancashire Regiment.

Six days later on 3rd September, serving in the Mounted Infantry Company in an action S.S.W. of Maktau, Lieutenant W. T. Dartnell of the 25th Battalion Royal Fusiliers, who was himself wounded, on “seeing the situation, and knowing that the enemy's black troops murdered the wounded, insisted on being left behind in the hopes of being able to save the lives of the other wounded men.  He gave his own life in the gallant attempt to save others.”  For his selfless actions on that day Lieutenant Dartnell was subsequently awarded a posthumous Victoria Cross {see Maktau 3rd September 1915}.