During the Great War all of the battalions raised by the Royal Fusiliers wore the fused grenade cap badge of that regiment with the exception of the Jewish (38th to 40th) and Frontiersmen (25th) Battalions who adopted their own.  The 25th Battalion retained the fused grenade as the basis of the design but added a number of embellishments to create a unique badge, a former soldier of the 25th Battalion recalled that “The cap badge was a grenade with the figures 25 on the globe surrounded by a scroll on which was Royal Frontiersmen Fusiliers”.

The generally accepted ‘industry standard’ cap badge reference book, Kipling & King’s “Head-Dress Badges of the British Army”, refers to the existence of three patterns of cap badge being associated with the battalion, whilst Westlake’s “Kitchener’s Army” further suggests that there were two versions of one of the patterns, making four versions in total.  The details of the cap badges, as per these two reference works, are as follows:

A fused grenade with the numeral 25 on the ball.  Below, a scroll inscribed Royal Frontiersmen Fusiliers.  In gilding metal.  It is believed that this early badge was made from Grenadier Guards cap-badges with the scroll added in a local garage.

This badge is said to have been made in a local London garage by adding a scroll to a Grenadier Guard’s cap badge. 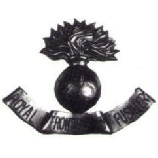 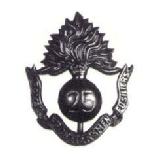 A fused grenade with the numerals 25 on the ball, and a crown on the neck of the grenade.  A tri-part scroll, with the ends reaching the flames of the grenade, is inscribed Royal Frontiersmen Fusiliers.  In gilding metal. 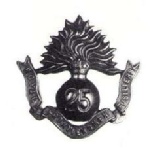 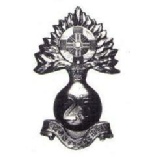 A fused grenade with the numerals 25 on the ball, and a crown on the neck of the grenade.  On the flames a flat circular plate and on this, superimposed on a red cross, the Great Union in the centre of which is a smaller circle inscribed God Guard Thee.  Below the grenade a scroll inscribed Frontiersmen.  In gilt with red, white and blue enamel.

A gilt badge bearing, in red, white and blue enamel, a Union Jack.  The motto ‘God Guard Thee’ is placed on a small circle at centre of the Union Jack.

In 2008 a thread was initially started on the British & Commonwealth Military Badge Forum to discuss the cap badges associated with the 25th Battalion Royal Fusiliers.  This thread, after a brief flurry of inconclusive activity, sat dormant for a couple of years until it was resurrected in 2010 with the addition of further material.  This later discussion, being based as it was on documentary and photographic evidence, led to the acceptance of the number of patterns, the order in which they appeared and whether they were actually worn by the battalion being challenged.  The result of this discussion forms the basis of the detail I have added on the following pages: