One of the factors to be considered about this pattern of cap badge is its apparent scarcity.  The four variants shown previously appear very infrequently for sale on auction sites etc. perhaps reflecting the fact that the 25th Battalion Royal Fusiliers only ever mustered about 2000 personnel in total during its three year existence and the badges are not in plentiful supply.

The details on the previous page are therefore, as far as I am concerned at present, the extent of this variant of cap badge worn by the 25th Battalion Royal Fusiliers.  There is a fifth variation of this pattern of badge available which appears for sale on those same auction sites etc. on a regular basis and on significantly more occasions than any of the others, but which, for a number of reasons, I have my doubts about.  I won’t go into too much detail about why it raises my suspicions but, it is sufficient to say, I have not seen any photographic evidence of this particular style of cap badge being worn by members of the 25th Battalion Royal Fusiliers.  To be available for sale, in the frequency that it appears, suggests that it should show up on photographs being worn by members of the battalion, the problem I have at present is that it doesn’t.  This non-appearance, coupled with a number of production differences, material types, and flaws on this variant lends me to think that these are possibly early reproductions or copies. 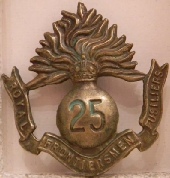 One final cap badge variation that there is pictorial evidence for is a version of the collar badge being worn as a cap badge in the puggaree band of the Wolseley pattern foreign service helmet. I cannot be sure where this variation fits in to the overall picture but I don’t believe it was general practice.  My belief is that it was a temporary arrangement, possibly due to a lack of proper cap badges, just prior to the original battalion proceeding overseas. 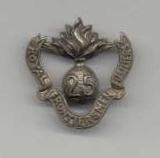 Pocock, G. A., One Hundred Years of the Legion of Frontiersmen (Phillimore, 2004)

Discussion thread can be found at http://www.britishbadgeforum.com/forums/showthread.php?t=319&highlight=frontiersmen&page=1

The Wolseley pattern foreign service helmet was worn by the battalion in East Africa with a puggaree, a cloth band or scarf, fixed around the crown.  Although dress regulations stated that “No badges, plumes, hackles or ornaments of any description are to be worn with the khaki helmet” the puggaree had a ‘dip’ at the front of the helmet which did allow a cap badge with a long slider to be worn or, in other instances, some other units chose instead to wear a regimental patch, in place of the cap badge, on the left side of the helmet.  I believed that the 25th Battalion Royal Fusiliers (Frontiersmen) either wore no badge at all, as per dress regulations, or the cap badge with slider was worn on the front of the helmet, now however an image has surfaced that shows a further adornment.  This image clearly shows that at some time, possibly getting towards the end of the campaign, that some members of the battalion did indeed wear a regimental patch on the left side of the helmet instead of the cap badge.