The Great War saw an unprecedented number of new Battalions raised, for the war’s duration, none of which were authorized to bear Colours like their regular counterparts.  This situation changed when, on December 2nd 1918, General Routine Order 5734 announced ”...In the case of Battalions for which Colours have not hitherto been authorized, His Majesty King George V has been graciously pleased to approve of each Battalion (Rifle Battalions excepted) being presented with a Silk Union Flag to take the place of the King's Colour.  His Majesty has been pleased to command that these Flags, which will represent the King's Colours, are to be consecrated, and are to be granted all the salutes and compliments authorized to be paid to Regimental Colours. Until consecration has taken place they will not be granted the dignity of Colours.  These silk Union Flags will arrive shortly.”

A second GRO 5858 of December 17th 1918 announced that “The silk Union Flags are now available, and their issue will commence at once.”

This was later followed up by Army Council Instruction No. 444 of 21st July 1919, which stated “His Majesty the King has been graciously pleased to approve of the presentation of a silk Union Flag to each Service, Young Soldier, Graduated and Garrison Battalion of the Regular Army, to each Second and Third Line Territorial Force Battalion, to each T. F. unit which has served as infantry, and which under its normal organization is not entitled to a guidon or colours, and to each Battalion of Oversea Troops, Rifle Battalions excepted, which has served abroad during the War. 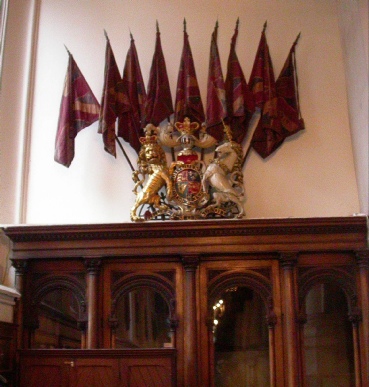 His Majesty has been further pleased to command that these Flags, which will represent the King’s Colour, are to be consecrated and to be granted all the salutes and compliments authorised to be paid to Colours.  In the case of Battalions which have been disbanded or otherwise ceased to exist, the final disposal of the Flags rests with the Commanding Officer and Officers of the Battalion at the time of disbandment, subject to the proviso that they are to be deposited in some sacred or public building in the locality where the unit was raised.  It is to be distinctly understood that the flags remain the property of the State, and are not to pass into the possession of, or be handed over for custody to, any private individual.  The Flags as issued are plain Union Flags, and no additions (except titles and numerals) can be sanctioned.”

It is clear from the wording of the Routine Orders and Army Council Instruction that these were Union Flags which were to be treated as Colours, and not colours proper. They were issued plain; any battalion that wished to place their titles and battalion number (and later, battle honours) on them could do so, but at their own expense. They were machine-made rather than hand-embroidered, as is usual with colours, and the pikes had a plain brass spearhead finial, rather than the Royal crest in gilt.

It is believed that the 25th Battalion’s Colour is one of the nine flags laid up in the Royal Fusiliers Memorial Chapel situated in the Church of the Holy Sepulchre at Holborn Viaduct, London. No additions were made and the flag of the 25th was left plain, as issued.  A number of presentation ceremonies were performed in the issuing of the Colours to their respective battalions but unfortunately no reference to a presentation ceremony for the 25th Battalion has been found.