When war was declared in August 1914, Daniel Patrick Driscoll, the founder and commanding officer of Driscoll’s Scouts during the Second Anglo-Boer War, was at that time the commandant of the Legion of Frontiersmen, a quasi-military organisation founded in 1904 for fellowship and for service to the State in time of need.  Reflective of the Legion’s philosophy he proceeded to offer the services of 1000 of the Legion’s 10500 members to the War Office, undertaking to land “on the French coast to work behind German lines” and to wage a guerilla war "to clear the country of all detached bodies of the enemy.”

On 10th February 1915 a further inspection of Legion of Frontiersmen members was carried out, this time at Horse Guards Parade, by Major-General Sir Francis Lloyd.  Here Driscoll was again able to show the calibre of men it was possible for the Legion to recruit and finally, two days later, in a letter dated 12th February 1915, Brigadier-General F. R. C. Carleton, the Director of Organisation at the War Office, informed Driscoll, now afforded the rank of Lieutenant-Colonel, that “approval has been given for you to raise an infantry battalion 1000 strong, to be called the 25th (Service) Battalion, Royal Fusiliers (Frontiersmen).”  The War Office seconded Major C. H. C. Guest, a General Staff Officer 2nd Grade in the Department of the Chief of the Imperial General Staff, for the purposes of organizing the battalion and would later appoint Captain H. H. R. White (King’s Royal Rifle Corps) and Lieutenant F. W. Clark (Royal Fusiliers) as Adjutant and Quartermaster respectively.

The following day, 13th February 1915, saw recruitment begin in earnest as the first volunteers were attested for the new battalion. Cards, like the one shown below, were sent out to existing members of the Legion as recruitment continued throughout March with the battalion moving towards a full establishment. Frontiersmen and like minded individuals answered the call from all across the globe, “from Patagonia to Alaska, from New Zealand to China, from London to London east or west.”

The enlisting troops didn’t go into camp whilst in England but were instead allocated billets in and around the Eastern Central area of London where they were assigned to their respective companies and platoons, issued with uniforms, boots, etc., and vaccinated. Battalion headquarters was established in Tufton Street, Strand, and the 6th (City of London) Battalion (Rifles) barracks at 57a Farringdon Road served as the battalion depot.

The desired number of recruits for the battalion was reached just after mid-March although recruitment continued right up until the battalion embarked for overseas.  In his recollections Pedersen states that “1286 of them from all parts of the earth” enlisted into the battalion and, although difficult to prove definitively, available records show that the number enlisting into the battalion between 13th February and embarkation on 10th April 1915 was somewhere close to the figure quoted.

The 25th Battalion Royal Fusiliers (Frontiersmen) have long been regarded as exceptionally formed due to the quality and experience of the recruits, this being the reason for the battalion being sent overseas without significant formal training in Britain.  The original battalion strength was largely comprised of the older man, many with previous service in the Second Anglo-Boer War and other conflicts, who hailed from many diverse backgrounds and occupations.  Besides the average stay-at-home Englishmen, there was more than a sprinkling of colonials and adventurers, men from Valparaiso to Alaska and from Rangoon to the Fiji’s. Much emphasis has been placed on the more exotic characters of the battalion, the big-game hunters, a naturalist, a famous photographer, a lion tamer, a few American cowboys, a lighthouse keeper, some circus clowns and acrobats, an Arctic explorer, an opera singer, a number of Russians escaped from exile in Siberia, a millionaire, a Buckingham Palace footman, some French Foreign Legionnaires and a general in the Honduras army, which, whilst undoubtedly true, does tend to create a romanticized picture of what the battalion was like.  What mustn’t be forgotten is that there was also a large proportion of the battalion’s members, perhaps as many as 50%, who had had no previous military experience and had never fired a rifle.  These were recruits who, like the bulk of the volunteers encouraged to enlist at Kitchener’s “call to arms”, were just ordinary men from all walks of life united by a thirst for adventure and a common desire to put the Hun in his place.

As the battalion continued its formation in London much speculation existed as to where its services would eventually be employed. The issuing of tropical khaki drill uniforms and Wolseley pattern foreign service helmets instantly ruled out France and Flanders with Egypt being suggested by the men as the battalion’s most likely eventual destination.  On the evening of 9th April the battalion paraded outside the Farringdon Road drill hall for the last time and at midnight marched through empty London streets to Waterloo Station.  Here, on number seven platform, they entrained aboard the London and South Western Railway train that was to transport them to Exeter’s Queen Street station and thence onto Plymouth’s Devonport Docks.  Departing from Waterloo at 2 a.m. on the 10th April the battalion journeyed down to Plymouth and arrived at the Docks at 10 a.m., the rest of the day was spent embarking the troops and baggage to their respective stations aboard the Hired Troopship “Neuralia”, a British India Steam Navigation Company vessel previously used on the London to Calcutta route, and once completed the ship sailed that night bound for British East Africa.

One Hundred Years of the Legion of Frontiersmen - Geoffrey A. Pocock.

Pedersen recollections in The Frontiersman, February 1948.

Various other newspapers including the Daily Express, Manchester Guardian, The Scotsman & Irish Times. 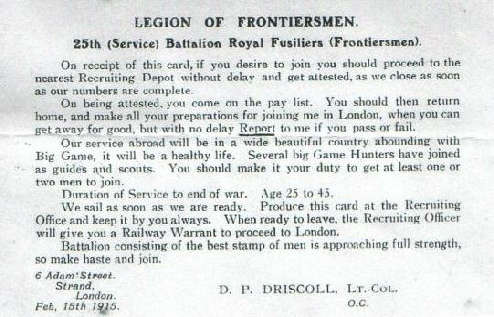 His offer, not unsurprisingly, was rejected by the War Office who couldn’t possibly sanction an ‘irregular’ unit to work independently in such a manner but they did however request that Driscoll parade his men.

This he did when, on 5th September 1914, he marched at the head of a unit 700 strong from the Embankment to Vincent Square, Westminster where they paraded in front of Lieutenant-General E. C. Bethune, Director-General of the Territorial Force.  Composed predominantly of Legion members living in or near London, but with contingents from elsewhere in the country also present, the parade was well received by Bethune who congratulated the men on their smart appearance and said that he should report favourably of them to the War Office.

Despite receiving Lieutenant-General Bethune’s approval the overall outcome of the inspection was that the situation remained unchanged. The War Office continued to decline to use the Legion of Frontiersmen in any sort of fighting capacity and, as a consequence, many of the members, eager to serve King and Country, volunteered for other units. 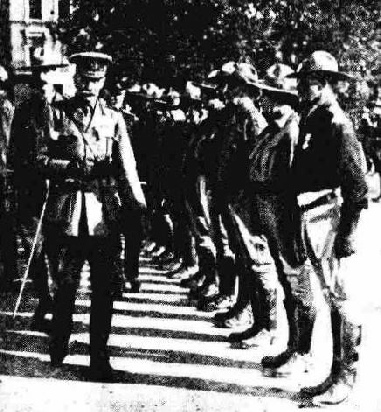 GENERAL BETHUNE, DIRECTOR-GENERAL OF THE TERRITORIAL FORCE INSPECTING THE LEGION OF FRONTIERSMEN AT VINCENT SQUARE

Driscoll in the meantime, continued to badger the War Office on behalf of the Legion until, in January 1915, the War Office finally had a change of heart.  On 30th January Driscoll was quoted in a newspaper article that “I am now authorised to raise 1000 men in a body, to go on service in a region which will be indicated to them. They can be sure of having a hot time when they get there and of seeing the kind of service that Frontiersmen and such like enjoy” and a number of advertisements to this effect were placed in many of the major newspapers.