After the action at Nurunyu on 18th August 1917 a period of stalemate had ensued as both sides consolidated their positions.  Major-General Beves arrived to take command of Lindi Force and reorganised the force into two columns, each roughly the size of a brigade.  No.3 Column, under Brigadier-General O’Grady, now consisted of the 1/2nd and 3/2nd King’s African Rifles with the Bharatpur Infantry and No.4 Column, under Colonel A. J. Taylor, consisted of the 8th South African Infantry, 30th Punjabis, 3/4th King’s African Rifles and 259th Machine Gun Company.  Each column was now supported by artillery of the Stokes Mortar and Mountain Batteries with the 25th Royal Fusiliers and 3rd Nigerians forming the Force Reserve along with the remaining artillery units.

All the time a constant pressure was exerted on the German forces with artillery intermittently bombarding their trenches and their forward posts being harassed by British patrols but, as Lindi Force was outnumbered by the opposition forces, no advance would be attempted as they awaited reinforcement.  Once reinforcement, in the shape of Kilwa Force’s Nigerian Brigade, was committed a general advance was again commenced at the end of September pushing the Germans back towards the Massassi area.  The Nigerians made touch with Lindi Force’s right on 11th October and the British now started flanking movements against the opposing German positions.  As was usual the German Commander, von Lettow-Vorbeck, would not risk being encircled and once again withdrew his force, this time falling back to positions at Nyangao.  Here however he had a change of plan.  Instead of continuing to withdraw in the face of the British advance, as was the more usual course of action, he instead decided to check the advancing British force by using a significant part of his reserve to reinforce the troops already there and in so doing brought on what was to become one of the severest actions of the whole campaign. 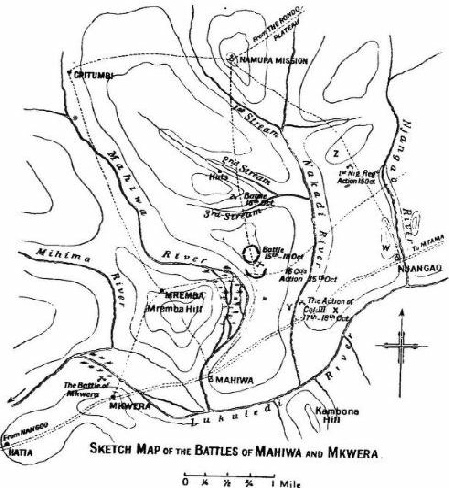 Having been at the head of the battalion throughout the campaign Lieutenant-Colonel Driscoll had finally succumbed to illness and the rigours of the campaign at the end of September.  He had had to leave the battalion south-west of Mtua and was eventually invalided back to the UK.  Temporary command of the battalion fell to the adjutant, Captain C. E. S. Bull (Dorset Regiment, Special Reserve), but, being more suited to staff work he wasn’t with the battalion in the field, Captain (Acting Major) M. Ryan assuming command of the 126 men left of the 25th Royal Fusiliers who marched with Lindi Force’s Reserve.

Major-General Beves’ instructions, in accordance with General Van Deventer’s original design, had been communicated to No.3 and No.4 Columns of Lindi Force and the Nigerian Brigade on the 10th October.  The two Lindi Force columns were to converge on Mtama whilst the Nigerian Brigade was to cut the Lindi-Masasi road at Mahiwa. Further orders for the Nigerians, on the 13th October, saw their objectives changed as the bulk of the brigade was ordered to advance on Litunuo (on the 14th) and were to attack Mahiwa at dawn on the 15th, only a single battalion was to proceed to the Lindi-Masasi road.

By the 14th October the 1st, 2nd and 4th Battalions Nigerian Regiment along with the Nigerian Battery and Stokes Mortar sections of the Nigerian Brigade had advanced towards its objective of Mahiwa. The 1st Nigerians, Gambia Company and a section of the Nigerian Battery were left at a point four miles north of Nyangao on the 15th as the main brigade strength continued to march westwards.  The detached force was to proceed towards Nyangao, to the road there, and block any German escape along that route.  Encountering ever stiffening opposition as they approached their objective, the force was obliged to halt for the night and dig in as they were met by an equally strong German force well dug in along the ridge in their front.

To the west, the Nigerian Brigade’s advance parties (4th Nigerians) were also meeting heavy resistance on the approach to the Mahiwa River as German troops astride the road and on the slopes of a hill south of the river held up the advance. A company of 2nd Nigerians was sent forward to assist at the same time as a company of 4th Nigerians attempted to work round the German’s eastern flank.  This attempted flanking movement was seen by the Germans however and counter-attacked, forcing the 4th Nigerians to withdraw with heavy loss.  Lieutenant-Colonel Mann, in command of the Nigerian Brigade, upon seeing the strength of opposition before him, decided it was wise to entrench and wait for the main Lindi Force to come up.  No sooner was this done than German troops (Abteilung Ruckeschell, 10th and 21st FeldKompanies) crossed the river and developed a strong attack against the Nigerians right flank.  This attack was held and eventually driven back but it was now apparent that the Nigerian Brigade was being surrounded as German troops now opposed them on three sides and more were moving into position to block the northern side, this they eventually did and in the process severed the telephone line which had been laid.  Isolated, with all attempts to break through thrown back by heavy fire, the brigade had no option but to sit tight and wait for help.

On 16th October orders were received for the two Lindi Force columns to press on vigorously and for the 1st Nigerians, along with Gambia Company and a section of artillery, to attempt to force its way through the German positions and effect a junction with the beleaguered brigade.  In the process they were to take forward the reserves of supplies and ammunition previously left behind.  Despite all good efforts this junction could not be forced by the British troops as they encountered an equally strong enemy force, consisting of Abteilung Goering’s 4th and 13th FeldKompanies and 8th Schützen Kompanie, supported by the 18th Feldkompanie of Abteilung Köhl and later still reinforced with 10th and 17th FeldKompanies and 6th Schützen Kompanie, and were beaten back with heavy loss.

Meanwhile the main body of Lindi Force’s No.3 and No.4 Columns was slowly coming into action.  Force Headquarters remained at Mtua with the Reserve (126 semi-fit men of the 25th Royal Fusiliers, 150 men of the 8th South African Infantry, 5th Light Infantry, a company of 61st Pioneers and a single, tractor-less, 5.4” Howitzer) whilst the two columns advanced.  Brigadier-General O’Grady’s No.3 Column, with Major-General Beves in overall command on theground, advanced against the German northern flank whilst No.4 Column, now under the command of Colonel H. C. Tytler, was to advance against the German positions along the line of the main road.

25TH ROYAL FUSILIERS ON THE MARCH

As the two columns advanced the German forces fell back from Nyangao on the 16th October and instead took up a position on a ridge about two miles to the south-west, behind the Nakadi River bed.  Here they offered a most determined resistance on the 17th October and both No. 3 and No.4 Columns were heavily engaged all day.  No. 4 Column had advanced from Nyangao at daybreak and almost immediately gained touch with the enemy, the 3/4th King’s African Rifles attacked, supported by artillery fire, and by one o’clock had taken part of the position.  No. 3 Column had meanwhile come up on No. 4 Column’s right with the Bharatpur Infantry attacking and with 1/2nd King’s African Rifles in support.  German opposition to this attack steadily increased and soon both battalions were fully engaged.  At four o'clock a determined German counter-attack was made against both columns and the whole British line was pressed back for a distance before it too launched its own counter-attack and regained part of the ground lost.  As attack and counter-attack became the order of the day, darkness fell with this still proceeding and would resume again the following morning.

On the morning of the 18th October No. 4 Column launched an assault on the enemy positions in order for No. 3 Column to effect a junction with the isolated Nigerian Brigade.  No. 4 Column’s attack was at first successful, the 30th Punjabis drove the enemy from their trenches and occupied them, while parts of the 3/4th King’s African Rifles and the 259th Machine Gun Company came up on the Punjabis’ left to strengthen that flank, thus allowing No. 3 Column to successfully effect a junction with the Nigerians at 8 o’clock.  The enemy however was in force and delivered a strong counter-attack on the column’s left, which eventually compelled the British line to fall back to the river bed, this defensive position was maintained during the afternoon and further German attacks were repulsed.  No. 3 Column meanwhile attacked the enemy’s left flank and forced it back for some distance with the 3/2nd King’s African Rifles leading the assault but yet another ferocious German counter-attack was launched which resulted in a gap emerging between the fronts of the two British columns.

At 3.40 that afternoon the 126 men of the 25th Royal Fusiliers, by now attached to No.4 Column, were ordered forward to fill this gap (marked Y on the sketch map).  Whether accidentally mistaking the intended direction or intentionally altering course to assist the 3/2nd King’s African Rifles the battalion swung to the right. Instead of charging down upon the German troops opposing No.4 Column the men of the 25th Royal Fusiliers came up on the left flank of No.3 Column’s extended line and ended up advancing towards the wrong German entrenched positions.  In so doing they passed in front of a number of German machine guns, the result of which was devastating, the battalion was cut to pieces, leaving behind a trail of dead and wounded men, others rushed forward into clumps of dense bush but were there stopped by fire and a German askari bayonet attack.  A few survivors fought their way back to the British positions but the battalion was to emerge from the action with fewer than 50 men.

While the 25th Royal Fusiliers were attempting to fill the gap between the attacking fronts of the two columns the enemy also developed another strong counter-attack and it was found necessary to restore the situation by bringing up the 3rd Nigerians from reserve to the left of No.3 Column.  Enemy pressure continued until dark, but without further result, and on the morning of the 19th it was found that the Germans had retired.

The action at Nyangao, or Battle of Mahiwa as it is often referred to, was an unusual occurrence in the war in East Africa as, for probably the only time during the entire campaign, the German Schutztruppe forces were committed in sufficiently large numbers to stand and fight the opposing British force rather than adopt their more usual, hit and run, guerrilla style tactics.  British casualties suffered during the course of the action were significantly higher than the Germans but, as a percentage of the force committed, were comparable and with his resources dwindling von Lettow-Vorbeck, perhaps feeling his losses more keenly, ceded German East Africa to the British as he took what was left of his force over the border into Portuguese East Africa.

In a head to head combat that had resulted in the fiercest and bloodiest fighting of the campaign with both sides repeatedly attacking each other in thick bush over a number of days, the action at Nyangao, on 18th October 1917, was to be the 25th Battalion Royal Fusiliers’ final action of the war.

The Royal Fusiliers in the Great War - H. C. O’Neill.